Nancy Mroczek PhD most often called Dr. Nancy, rocks with authority. Nancy’s original music and delivery are pithy, dogmatic, and direct – the result of years struggling to know and to see and to find a way to think about and deal with life as it is. 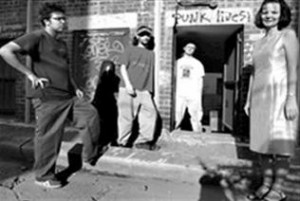 Nancy’s alternative music has been described as individual, high energy, contemplative, punkish, artsy, and provocative. Nancy’s performing style has been described as outlandish, audacious, heartfelt, and sincere. The music ranges from punk stylings to hard rock to contemporary and experimental sounds and melodically structured songs to funk motifs to rap and rhythmic styles. The lyrics are intelligent and often political. Songs are about challenge to us as persons together, shared hopes, need, and obligation, as well as about subjects such as animal rights, environment in crisis, general culture, and genetic engineering.

In parallel pursuit, Nancy also sings beloved jazz and other culturally standard songs in a creative and artful way. She has played with talented jazz musicians, including pianists Alon Yavnai of Israel and Les Blachut of Poland, as well as Boston saxophone and keyboard player James Merenda. Some of these video clips are posted on this site.  After an extended time out, Nancy had been singing jazz at Wally’s Boston jams during 2019-20.

Separately, Nancy holds a doctorate degree in Behavior and Neuropsychology.  She has also worked as a Certified Trading Advisor in financial derivatives and has produced her own television show in Boston called Toward A Quality of Life.